Or inspiration, whatever. We all borrow ideas and mix them in our brains to come up with everything from bikes, songs, a snappy shirt, a haircut, anything creative.
after adding the knuckle back section to my shovel frame and looking at the $20 stainless spoked, star hubbed, 19-inch wheel from the swap and figuring out how the bike wanted to go back together i had to flush all the other ideas i had becasue it was taking a turn on it's own.

after many, many hours of staring at the bike and mocking stuff up, squinting eyes, etc, i finally was getting back on track, from that and borrowing a few things.
The bike always had a shaved early glide on it which i planned to narrow, but glad i never did. i liked the too broad for todays cool choppers frontend, esspecially the extended one on this panhead from easyriders cira early '70s. 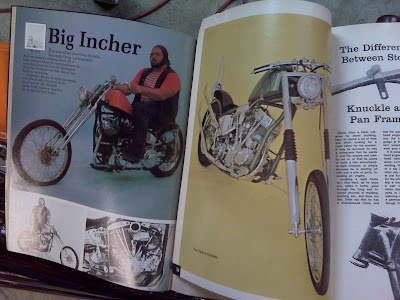 That and Big Armond's (RIP) second version of his knuckle with the shovel top end (above left). whoa, of course the bike is legend, so i decided to rip off the paint, well, not totally, but close. I had been thinking about painting my '72 Chevy truck hugger orange for some time and those thoughts leaked into the plans for the shovel almost subconciously. then stumbling onto this feature of Armond's that i hadn't seen before (only seen the knuckle version at that point). Simple "oakland orange" was it, that and a little black pinstripe...i was too big of a woose to do the frame orange too like the other bike here. 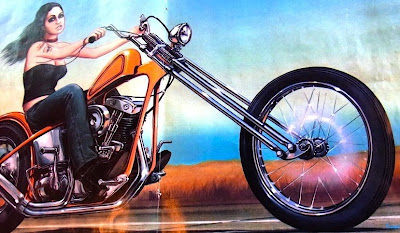 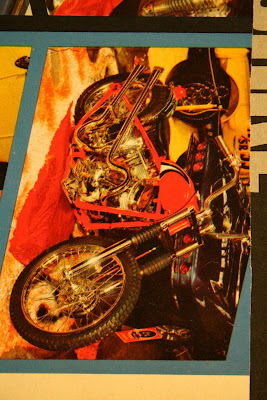 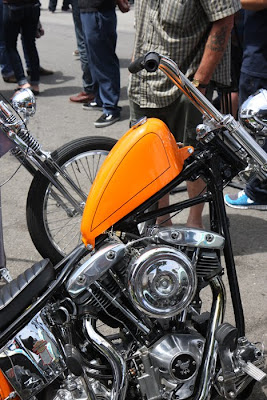 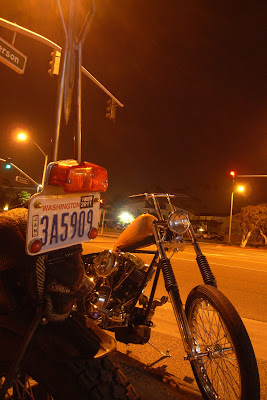 Then while toying with simple yet a little different sissy bar ideas i found this little panhead feature thta had a small safety pin style sissy bar. Bingo! So i ripped it off to my liking. While i have ome original stuff in my bike it probably wouldn't have happened if i was set in motion by these things 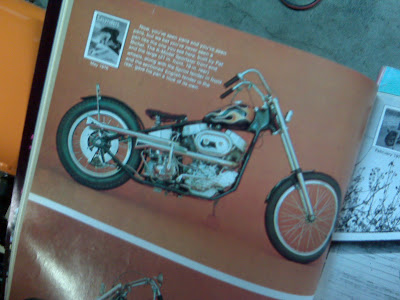