It looks like the new Street Chopper is out (even though we don't even have them at the office!) i picked this one up at Fullerton HD last saturday. I had the pleasure of shoot Domenic and his 16-year old son Dylan for the cover and a 5-page feaute on Dylan's '65 Panhead which he started working on when he was 8! Now that the bike is on the road and he has a license to drive, he and his old man are racking up the miles and pulling in some trophies. the Pan won his class at the Grand National Roadster Show in January and just won at the Long Beach Autorama. Go Dylan!
THis issue also has another Denvers bike, Danny G's evo, the Foundry Pan, Garry Littlejohn and Jeff Wright intervies and more. 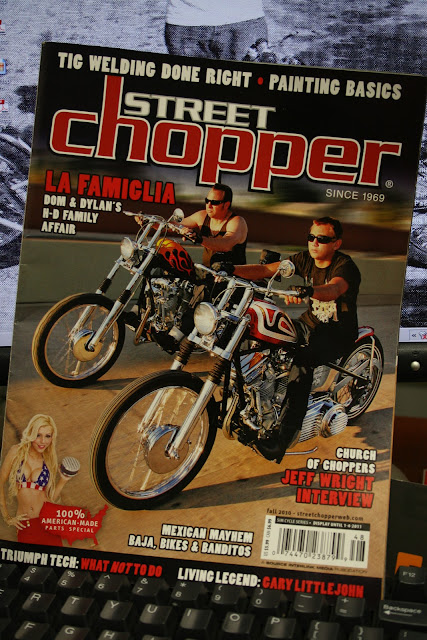 Labels: all in the family, street chopper magazine 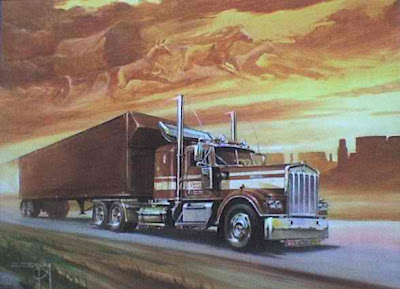 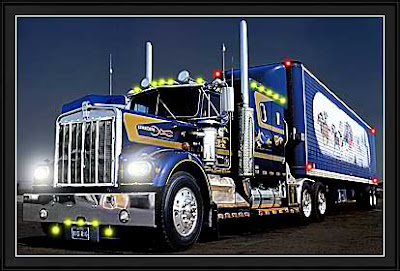 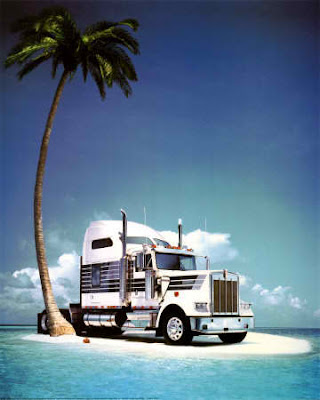 Grant and I have been hard at work here at FMA to bring you some cool new commodities. So, keep you ears on, grab yourself a seat cover or sleeper leaper and we'll be east bound and down.

been scambling since i got back from NY to catch up on everything and then some. the list grows...on that list is the 500-plus pics i took while there that i need to go through...we had a good time out on the right coast for the Invitational. 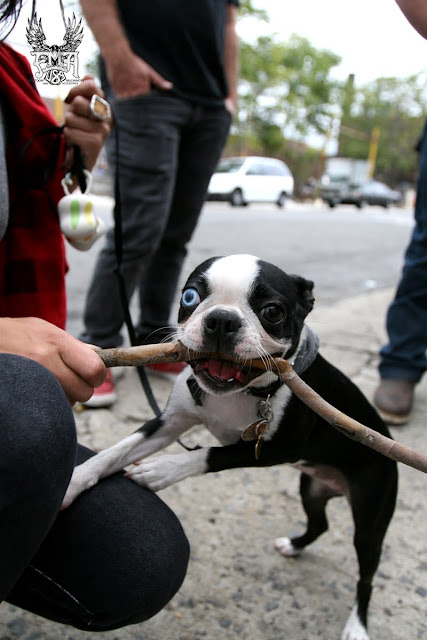 If this boston was a harley engine it would be this dual super B panhead! 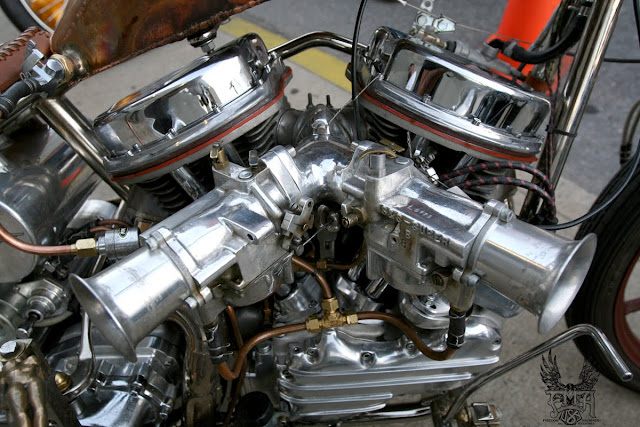 See you next week, no sleep til brooklyn. I left Harpoon in a trance of Morano Pearl and dust bunnies... 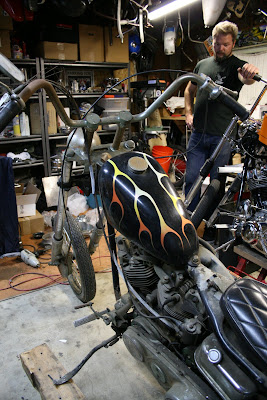 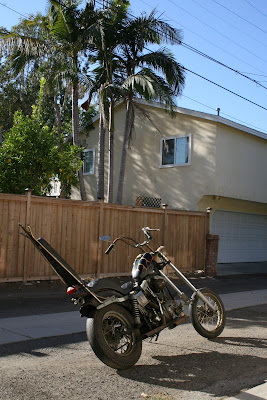 Got a couple Beautiful Buzzards shows coming up in Orange COunty. Next Thursday at La Cave in Costa Mesa with Wulfbane and Sleeping Sea King, show is free come early we open.
The following tuesday the 27th we are at the Detroit Bar, free, come early.
Posted by grant at 7:02 PM 1 comments

I didn't grow up in SoCal and wasn't a hippie either so i wasn't into vintage VW stuff, but i've always dug it when i see slammed bugs, buses, etc. THis guy was jammin down the 91 the other day on my way home and it was on the ground! 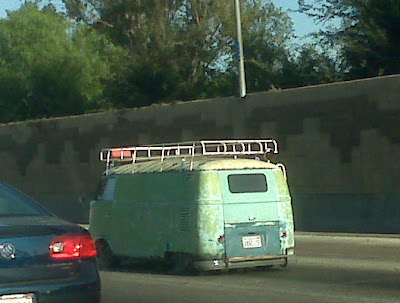 Also, i have to appologize to those that have order stuff recently. we are running a little behind, but everything will go out tomorrow for sure! Hang tight and we appriciate your biz!
Posted by grant at 6:48 PM 1 comments

Making the world go around

We are proud to have a few fine folks distributing our parts and apparel! Adding to the list are Lowbrow Customs (Ohio), Freak Out the Squares (Philly), and Rouge Speed Shop (canada), thanks dudes! Hopefully theyll all be partnerships that help us all out. 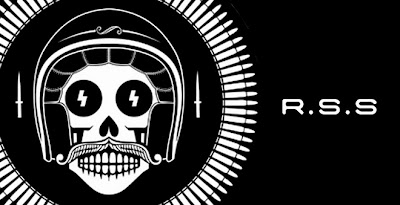 So stoked to be going back to NYC again, love that place! Mike D, myself, and the Bobber god are flyin out this week for the Brooklyn Invitational. I think i walked about 400 miles last time we were there. Anyone got a bike i can ride out there? 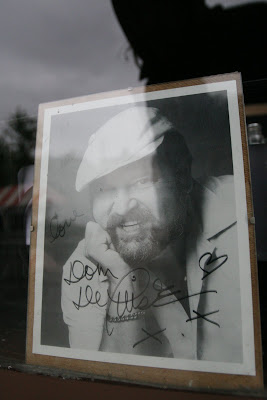 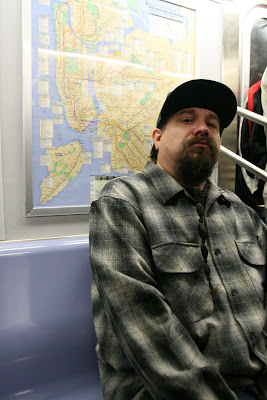 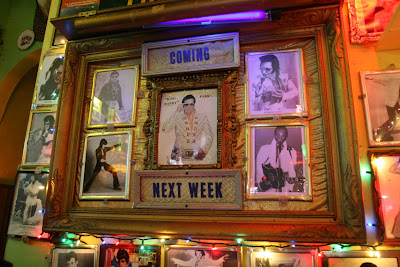 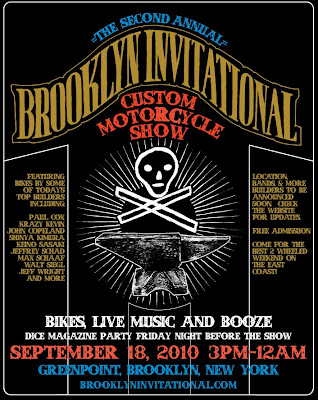 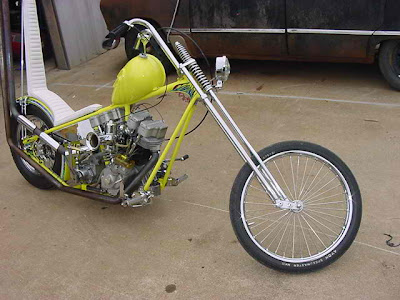 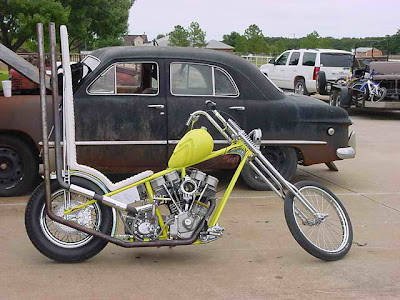 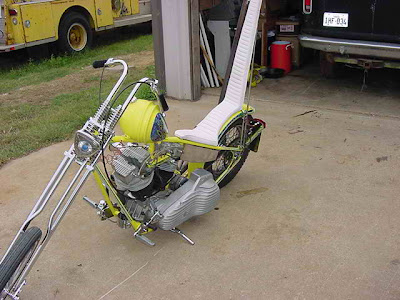 Last sunday at the swap we got to rap with Junior from Glorydays outta Texas. A real nice guy with a sweet Shovelhead. He had a goodtime too, so much he's coming back for the next one.

"I'd be a mistake to turn me loose around root beer"

We are a proud sponsor of Biltwell's Slab City Riot. It's a good excuse to get out and ride, camp, hang out, etc. November 6th out by the Salton Sea, see you there! 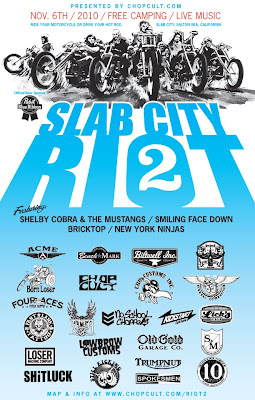 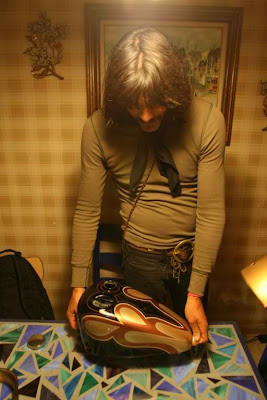 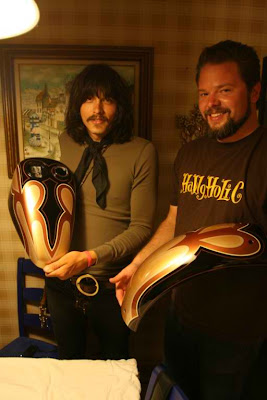 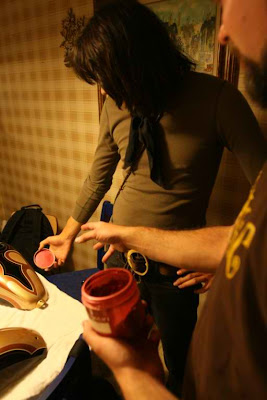 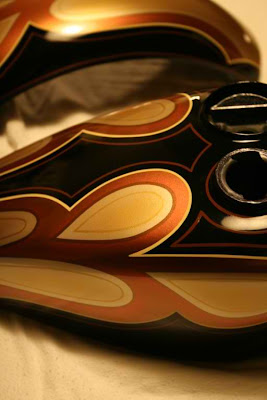 a while back JD hit me up for a new paintjob on his chopper. This is what i came up with in pearl blends. Grant built the kustom Hummer tank. Stay tuned for more buckaroos.
Posted by poon at 12:32 PM 2 comments

because where else are you gonna put em while on the road?


This was from hotel in Camerillo a couple of years ago (seeing as my bike is nowhere close to being like this anymore) when we went for the Primer Nationals. can't make it this year regretably but you all know already to go to the show, the open house at Dan's Old Gold Garage (we are a sponsor) and the Dice party. 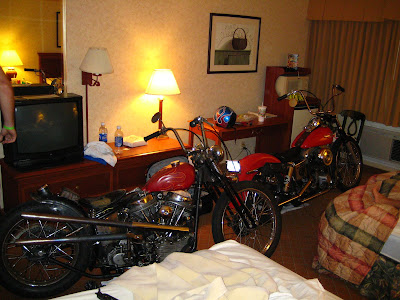 Me and the Poon had a good time layin down some Night Moves getting up there. i just remembered that i hyper extended my knee in the Harley dealer parking lot sunday morning, hurt more than i could imagine. I foolishly thought they might have a small circlip i needed that jumped ship on the road. the bandana-suited patrons that apparently hang out in the parking lot were already lookin at me funny for doing that crazy hopping motion thing to try and start my bike, then the knee thing happened and they were all glad to own their Roadkings. 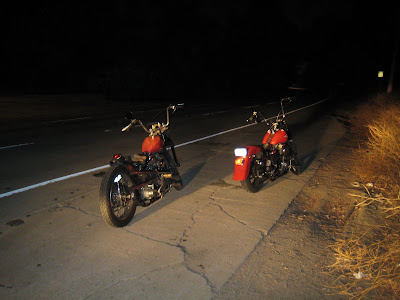 Man, i think i got some low grade food poisoning from the chicken Katsu at L&L Hawaiian on tuesday. Woke up yesterday with a terrible stomach ache and the back door trots.
Spent the day on the couch and the can. So Clyde and i watched a couple of flicks. one of them was The Hi-Riders by Greydon Clark fromn '77.

Labels: on the can 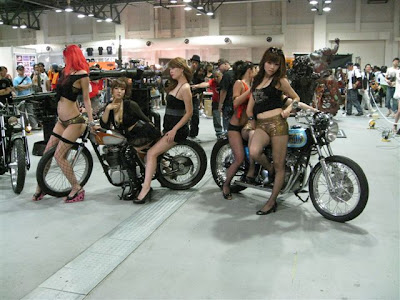