I have been going through older pictures and decided i going to do a few posts on some bikes i have built in the past the first bike i ever built is this 1947 WL. I built this bike in the summer of 2007 at Four Aces cycles. This bike meant alot for me. It was the first project bike that i had purchased with the idea of doing a full build on. Wes at Four Aces was asked to build a bike for the Horse's smoke out west build off and we decided that i would do this bike for it. The best part of this build was that i was able to meet someone who since has become one my closest friends, Frank Kaisler. He helped me so much with this bike, which in turn became the basis of all of the knowledge i've used to build my other bikes. The bike is a stock 47 WL motor and frame. The neck on the frame was raked quite a bit and with the stock length 45 springer the bike sits super low. Which looks great, but it wasnt great for riding. The trans is an early 50's rigid frame triumph 4 speed, it also uses a set of primarys from the same era triumph, that to me made the bike. To go with the mix of harley and triumph i made a carb adaptor to use an Amal carb. The bike was full of other little cool bits and pieces and the paint job was done by NickOteen. The bike is now somewhere over in japan. 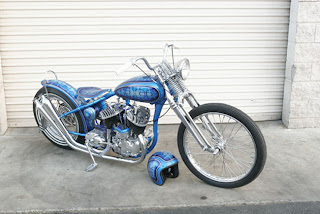 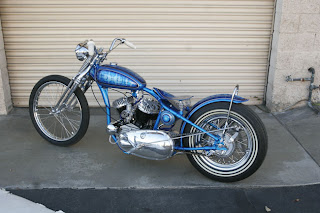 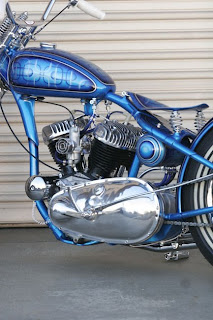 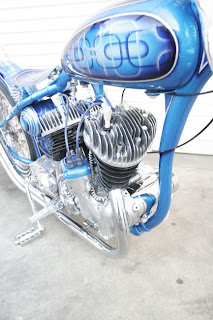 do it in the dirt 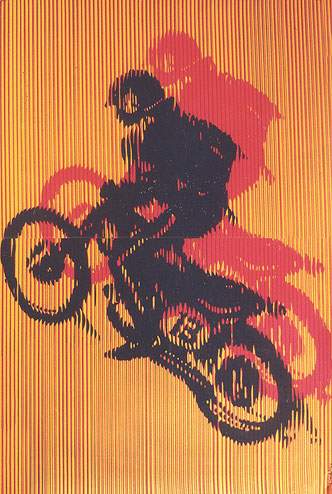 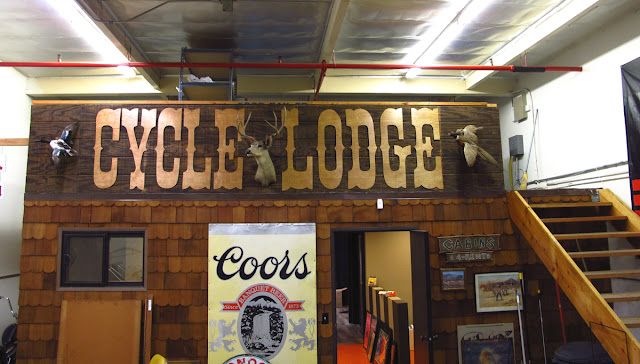 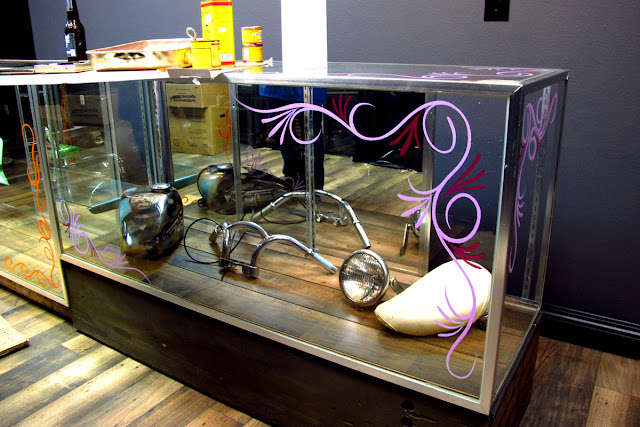 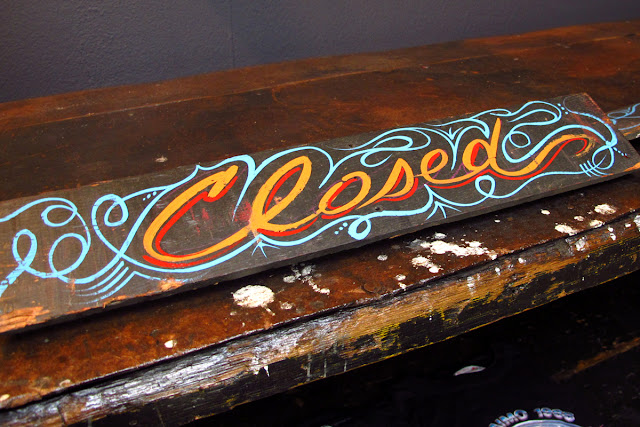 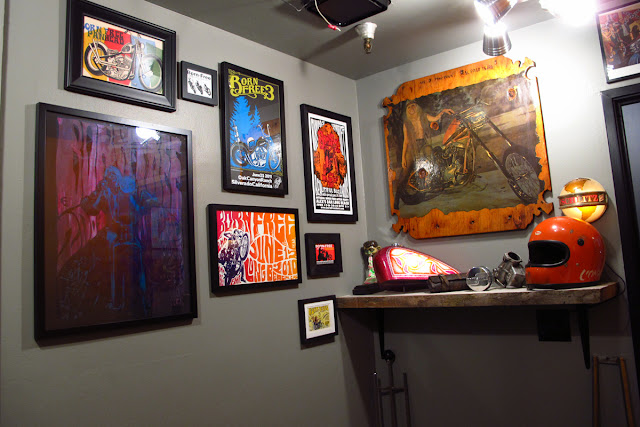 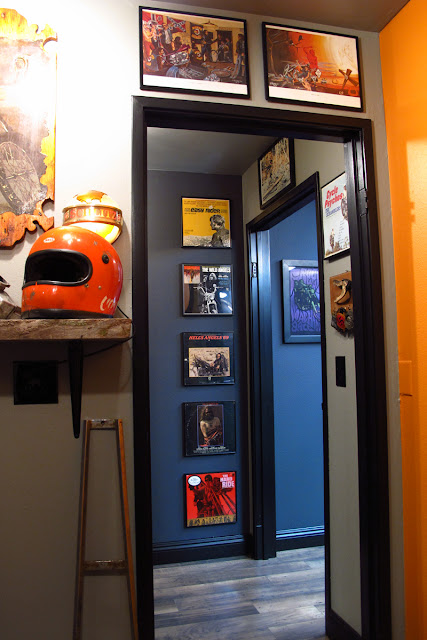 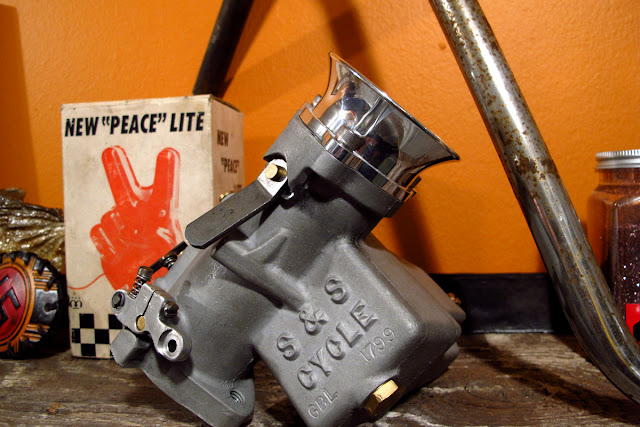 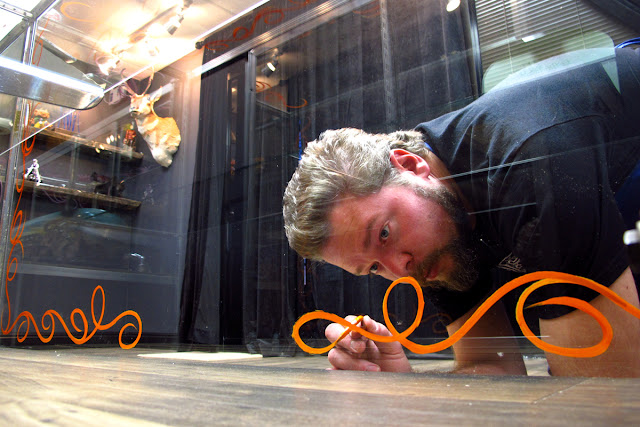 Slaved away another day at the ol' Cyclelodge. Getting there, got a long to-do list for tomorrow...
Posted by grant at 7:28 PM 6 comments

Been working on getting the Cyclelodge fully operational...tired...too tired to be witty...was hoping to be in bed by now...don't even care that it is saturday night...getting up early to do it all over again....if you were one of the many patiently waiting for your FMA order, they went out today priority mail....thanks for hangin in there. The move threw a wrench in our shipping department AKA me and Clyde and Clyde did more sleeping than packing...

Labels: too pooped to pop

Hey kiddies tune up your old sled, Civic, or rollerskates, it doesn't matter how you get there (but riding is good!) come to the Garage Company in LA (956 Hyde Park Blvd. Inglewood CA. 90302) during the afternoon/evening on Saturday March 12 because we will be unveiling the Born-Free 3 1946 FL Harley Knucklehead Chopper which will be brand spankin new! The bike is just about done as i type so you can come see it completed in person and check out the awe inspiring Garage Company, plus there will be refreshments and food provided by our gracious host Yoshi.

PLUS! if you didn't hear elsewhere, if you buy two or more Born-Free 3 Knucklehead posters w/tickets between now and the party, you'll be entered to win a Lowbrow Customs Alien tank painted by Harpoon! We'll be pulling tickets for this at the party. You don't even have to be present to win the tank. But remember you must be at Born-Free 3 on June 25, 2011 to take home the knucklehead!
See you soon! 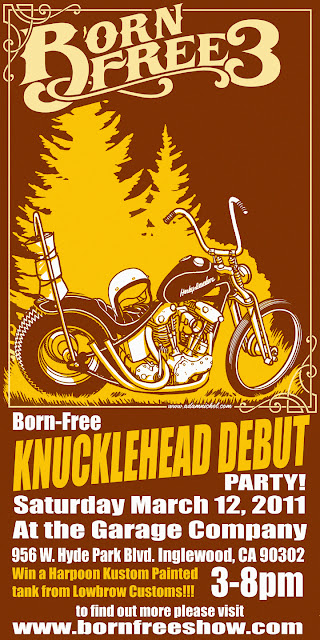 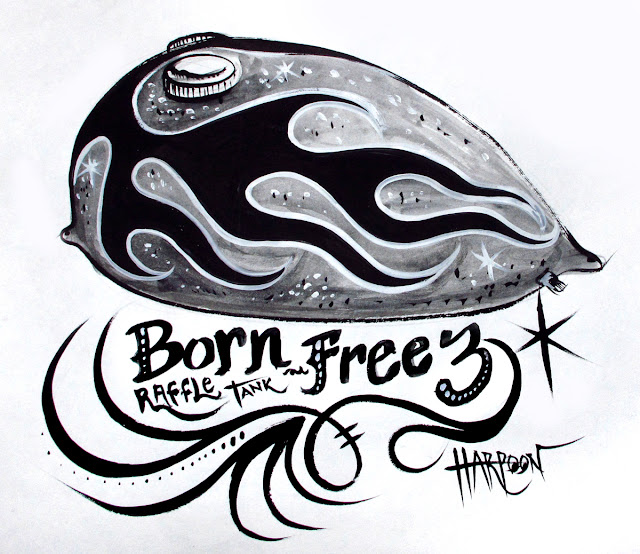 I have lost more hard drives and motherboards in my computer over the years, but my ipod holds true (knock on wood...). This means i have very little music on my actual iTunes, it's all on my iPod. My question is this, How do i get stuff off my ipod easily? To not only access it but to also back it up. Any help would be good...EDIT! Problem solved! Read below. 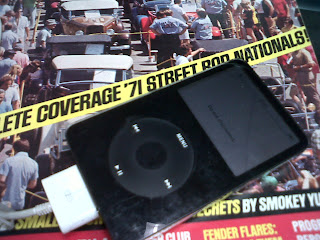 WINNER! I had a ton of emails about this subject, thanks everyone! Frank Guerrero sent a simple free solution that actually worked and is all done without downloading or buying anything. THis is for a PC (which i have).
Frank writes:
After you've loaded Itunes onto your system you will need to plug in your Ipod. In Itunes click on your Ipod which will show up on the left hand side of Itunes. You should see a bunch of tabs, the first being Summary. This is the Tab I want you to look at. Underneath the "Check for Update" and "Restore" buttons are your options. I normally only have "Open ITunes When this iPod is connected" and "Manually manage music" and "Enable disk use." The "Enable disk use" will need to be checked in order to work. You may need to uncheck manually manage music in order for Enable disk use to not be greyed out. Once you've enabled disk use your Ipod is now seen by your computer as a hard drive.This is where all of your Ipod settings and music is kept. I must mention that I'm only dealing with a PC and not a Mac. I'm not familiar with Mac's. Double click on my computer and you should see your Ipod's name and a drive letter next to it. Double click on it and then double click on iPod_Control. You will see folders but we are only interested in the folder titled "Music." This folder contains all of the music on you Ipod. Right click on that folder and copy. Find a location and paste this folder onto your system. I would recommend placing it in your Itunes folder located under My Documents\My Music\iTunes. This is the default location where iTunes defaults to. Past the "Music" folder here. It may take a little while depending on how many Gigs of music you had. Once the copying process has completed you will need to right click on the "Music" folder and click on properties. The attributes at the bottom of the folder will probably be checked for Read only. Uncheck that and hit apply. It will ask if you want to apply changes to this folder only or to this folder,subfolders and files. Apply changes to this folder, subfolders and files and click on ok. Click ok again and you will be out of the properties of the "Music" folder. Next you will need to open iTunes up and go to File>Add Folder to Library. Browse to My Documents\My Music\iTunes and double click on the "Music" folder. This should start importing all of your music off of your iPod and into your iTunes Library.
And as far as syncing your ipod and itunes library, just uncheck everything in your itunes library so it doesn't wipe your ipod.
Wow, simple and even worked. Once i hit copy i went to lunch and let it do its thing.
Thanks Frank!
Posted by grant at 3:54 PM 4 comments

Looking for a '47 knucklhead frame

Hey there in blogger land, a friend of ours is looking for a decent '47 Knucklhead bullneck frame, drop a line if you know of any...prefer something in socal, but not a deal breaker. 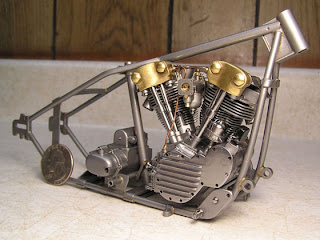 Labels: party til you puke

If you are in the area, stop by the Memphis restaurant on Broadway between First and Second Street. Myself, and a few friends will be playing our favorite rock and roll records for you folks...there are food and drink specials...open late...no cover 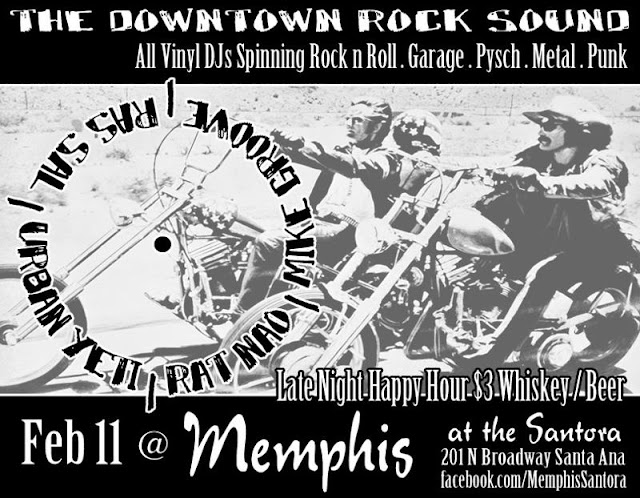 I'll be playing everything from this:

Born-Free 3 Newz you can Uze

While we were at the Grand National Roadster Show a friend and coworker of mine named Dennis Pittsenbarger hit me up for an interview to tell people in the world of Hot Rod Magazine what Born-Free is all about, check it out!
For more footage of whats happening at Hot Rod, CLICK HERE

Remember for all the latest Born-Free news including some exciting promotions and show info, please tune into and bookmark the Born-Free Blog at www.bornfreeshow.com


Pay attention around the 1:25 mark for Mike Davis on the left in the background busting out the baby wipes.

Get your copy of the second book in a series of 3...don't worry, number 1 isn't out yet, but will be soon! Once these babies are gone, they are dust!
CLICK HERE to buy yours. Each is signed and numbered. 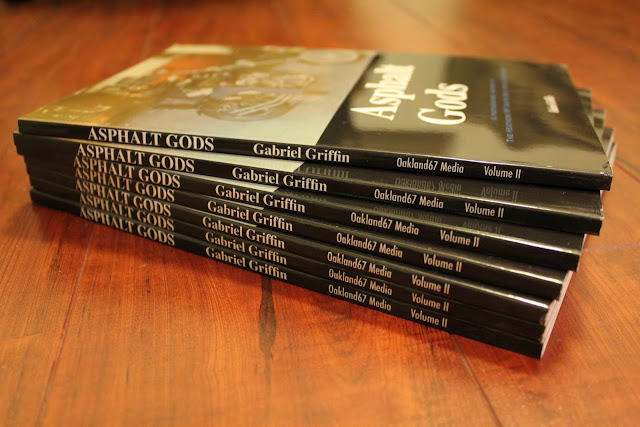 For those that don't know, this is a 77 page pictorial history of the Heathens Motorcycle Family from the '70s and '80s. Pictures came from original club members.
Posted by grant at 9:19 PM 1 comments

i have a little Canon G12 and have been tryin out the video on it...5 north bound

SOrry the rest of you have been freezing your buts off, but it's been pretty nice lately in the land of milk and honey...Poon, Jeff, and i had a few, good, fast miles yesterday. no superbowl, no tv, no drama, just simple fun. 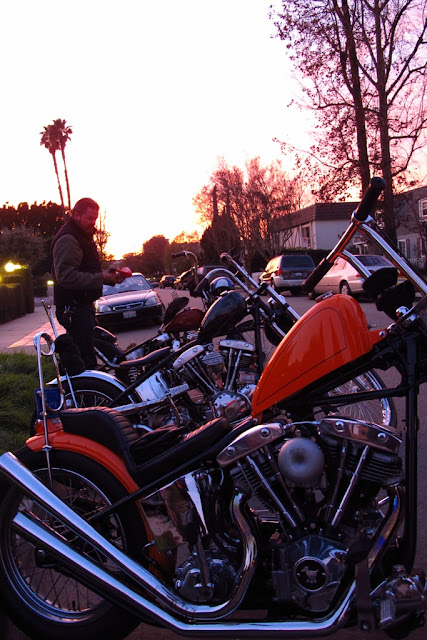 not sure what his name is yet, but we have a new mascott for the CycleLodge. Qute ain't he?

Thanks Hajime for the photo! 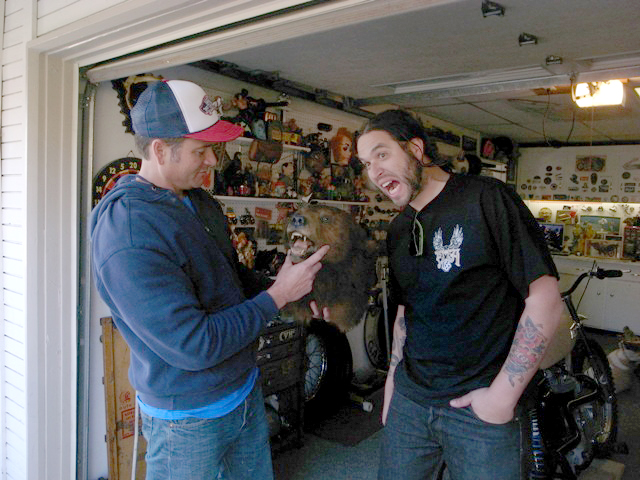 you never know where a little light mock up will take you... 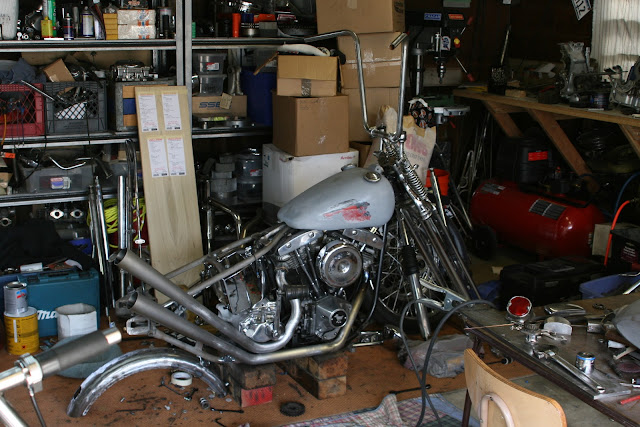 I completed ten paintjobs over the last year. it doesnt sound like much, but they are real hard to just crank out when you really care about the job, take your time and do the best work that you can. Here are two paintjobs that made their debut at the GNRS. Jeff Leightons 1938 Knucklehead "Violet Fantasy" and Chris Broders 1949 Chevy "Cyaneyed".

About a year ago Jeff approached me about painting the ultimate mid-60's show chopper he was building. I gave him my input as to what he would need for that and he was down to compromise nothing. Down to completely ruin a real nice 56 straightleg with molding and metalflake.
I layed out a pattern on his tank and he made it happen in steel-the goal being that the molding would look like it was just part of the paintjob until you get up on it and see the concavity.

sometime during the course of the intense molding and metalflaking taking place i picked up a veiling gun(that i was looking for 12 years for) used it first on the triumph tank i sprayed for Shige, the big S behind all of mooneyes, and then used it to veil Jeff's entire frame tank and fender. what this gun does is spin the paint out in a spiral pattern-but it only works with modified lacquers-this is not cob-webbing.
after the veiling i fogged a purple kandy blend everywhere.
then the dished areas were sprayed in a murano pearl blend of magentas.

without really counting, Im gonna say that close to a gallon of clear went down on this job just to make everything nice, smooth and deep(plus countless hours of wetsanding)
special thanks goes out to my molding/polishing madman Gary Gastmeyer

Cyaneyed
then there is the 49 Chevy I painted for Chris Broders. It's too late tonite to talk about this now(seeing as how it became much more than just a paintjob) so dig these pictures and I'll make another post later all about the paint, the car, the client, the details, Larry Watson, Mox Miller, Dennis Rickleffs and the great job done by Circle City Hot Rods in building the car.

I grabbed these pix from Eric at Los Boulevardos from a link off the hamb. these guys really dig the custom cars built during the late 60's and it shows.
http://losboulevardos.blogspot.com/
Posted by poon at 12:19 AM 6 comments