Larry Watson, and his work has meant a lot to me ever since my 1996 subscription to Rod and Custom brought me a story on the man. Larry passed on the day before his birthday last month and I've been meaning to make a post about the man, some called him "Leader" and he truly was. So stay tuned, this is the first of many, as I try to pay respect to Larry Watson as best as I can. 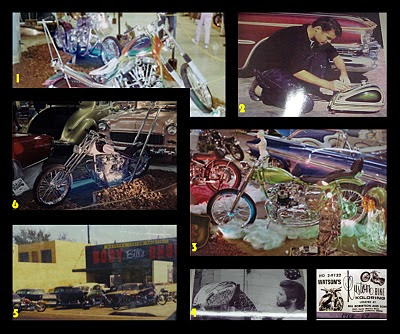 1. Watson was most proud of his "Rainbow" paintjobs like the one this panhead wears.
2. Here is the man in a 1959 shot striping up a triumph tank with his still new 1959 caddillac.
3. The "lawbreaker" show triumph with one of many the many Watson paintjobs it would wear. kustom molding by Bill Hines on this one note the Buddha Buggy in the background.
4. Lace painting, by the man who invented it.
5. Spread of show triumphs outside the other side of his shop ran by Bill DeCarr.
6. This may be my all-time favorite bike, Mike Vils triumph, which used to be guarded by his shotgun toting Grandma.
Posted by poon at 2:04 AM