Zack's bike from a couple of years back 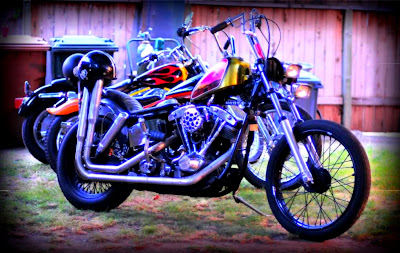 A couple years back when I was down visting the 'Pooner and Grant for Born Free, I had the opportunity to spend a little time w/ Dave Polgreen, Gator, Zack, Pete and some other guys from the middle of the country. What a great opportunity. I flew in and out within a 48 hour time-frame, slept for three hours and obviously didn't have a bike along with me, but I had an awful lot of fun just chatting with guys who are into choppers. I had more fun talking to them about not-chopper stuff, however.

Meeting Zack was good. We all like to think we've done some things in life and experienced the crazier side of it all, but this guy really has. Some of it involved crashing and burning, but from what I could tell, the dude paid attention along the way and learned a lot. Always neat to see someone bounce off the bottom and come out all the better for it. It was also fun to chase him around on his bike in the rental car. Much garbage gets talked about the Southern California guys, but to ride a motorcycle down there...woah! Traffic was nutso, moving at 80+, and Zack, Gator, Pete and a number of others non-Southern California natives navigated it with ease. A pretty neat thing to watch and one I'd like to experience sooner than later.
Posted by Jet City Jughead at 1:44 PM