Put the fast back in choppers 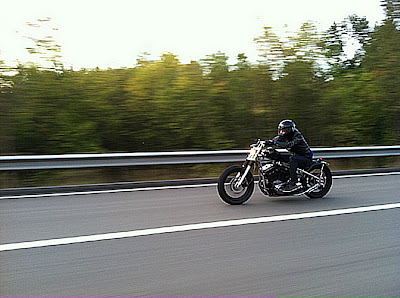 With so much emphasis put on style in our little corner of the custom cycle world, it's great to run across a bike that looks the part and hauls all manner of ass too.

My friend Jake here set his Sportster up to fly low, and he flies 'er low. The machine has been modified six ways to Sunday, and not just for looks. Barrels, heads, cams, ignition, monster brakes...you name it, it's been done. And this isn't just lip service for a friend. I've ridden the bike a few times, given it hell, and it pulls like a train.

There's no speedometer on the cycle, but I'd say I was well over 100 mph on that backroad in lovely Forks Washington. As best I could tell, there was another 20+ mph left in the bike, but I was worried about vampires and wearwolves running out into the road.

Put the money you were going to spend on chrome and moulding into your motor and go break the law. As best I can tell, it's the only thing it's there for anyway.
Posted by Jet City Jughead at 11:47 AM