Back to "normal life".
Born-Free is over, what a trip. Thanks to everyone that made it what it was, one for the ages. Before i get carried away, i want to let all those who bought FMA stuff online recently, we are getting to you now! Had to sideline you during Born-Free, but we can't do it without you either, so thanks!

Some people can't believe Mike and I do the show simply because we love it. There are no ulterior motives, no sneaky closed door dealings, no plot to take over anything, or get rich. I know as things get bigger you get both more support and more resistance. Why? Dunno, human nature i guess. Creating and doing are two of my favorite things in life. Always have been. Hopefully always will be. Only for the sake of making it to the other side of the journey with family, friends, and the experience. I certainly have not managed to figure out how to get rich in my time on this earth, but i have done quite a bit of the things i have set my sights on which as the years go by are just as important.
The people are for me what Born-Free is about. I'd say equally as important as the bikes. Every year we get to meet some of the like minded (usually after the show when we're not going nuts) and one of the people that impressed me the most this year was Michael Lichter. You should be at least semi familiar with the name. He's only the Dave Mann of biker photography. When i first saw him stroll through the main road at Born-Free he had about 100 pounds of cameras and gear on him and my initial reaction was "whoa, overachiever!". He's not a big guy either and i watched him pop up here and there and he didn't stop for 3 days. Day and night he shot photos. Even after i left the sunday BBQ at hills he stayed up and reportedly shot party goers until the wee hours of the morning. Documenting the places they chose (or not) to call it a night around Wil's house, garage, and i'm sure surrounding areas.
Michael, it was a pleasure to meet you and it is very apparent to me why you are the best at what you do...because you love it and work harder than anyone else. Inspiring. Talk to you soon.
I tried to stay out of Michael's lens with my lens as much as possible, but i snapped this when he stopped for a split second to eat (much later than the rest of us i might ad). 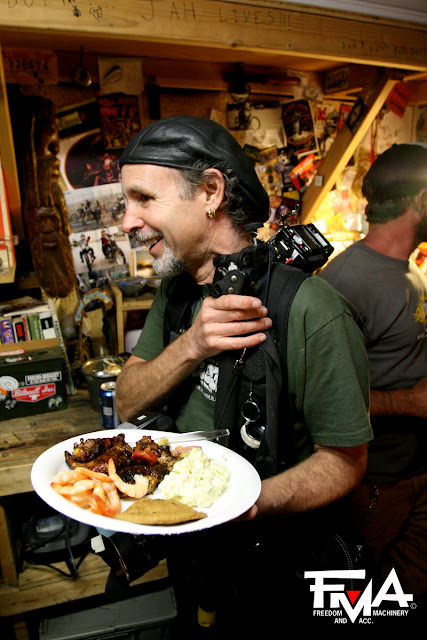 Labels: get off your ass and do something, inspiration, life on four wheels, passion, talent