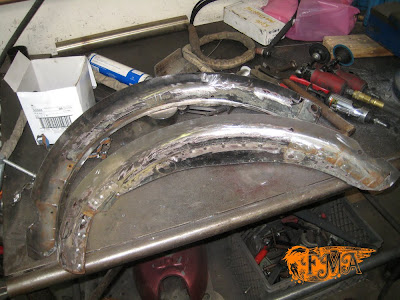 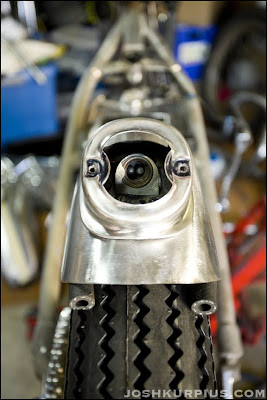 Thanks everyone! I guess i should post more of my fab stuff but i'm usually not thinking about taking pics while i'm working, i do that for work!
Yep, 19 in the rear. This whole thing started with this star hub, stainless spoke, 19i got at the swapmeet way too cheap about the same time i got the pan frame i used for the hardtail and thought the two should go together! What a pain in the ass! and i'm even building a totally different wheel in the back after all is said and done...I'm using a knuckle 19 rim and a mid star hub with a juice drum since i didn't use the brake cross over during the hardtail. 5 months later here i am. The fender is an early Sportster like the one i had on the bike before, but i narrowed it 1 1/2" (which is why i narrowed the tank that much)to fit the tire, took the skirts off, and re-enforced the crap out of the inside. I'm paranoid of craking fenders after the last in carnation of the bike, but i think it should be good with the shorter sissy bar and twice as many fender mounts than was on the last version as a swingarm. it's funny too, because i didn't set out to build a "skinny" bike, but things happen. I should be building pipes this week as well as doig body work and sending more out for chrome...stay tuned.
Posted by grant at 9:53 AM