After Vagrant Vinny fizzeled out i had been talking with Jason Hampton about getting together and playing some loud and heavy stuff since his last band Revolution Mother went their separate ways. We would talk about it at the swapmeet and jammed with some other people then finally came together along with Jason's long time friend and drummer Barry Fader. Jason is singing and playing the guit axe and i'm on bass, just a three piece.
So was born the Beautiful Buzzards. We have been playing together since the first of the year and are about ready for some shows one of which will be the after party for Born-Free at Alex's Bar in Long Beach on June 12th. We also recorded a few songs the other week that you can download for free HERE on the Beautiful Buzzards blog 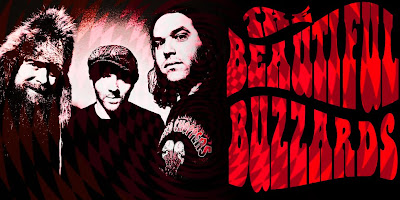