A few weeks back i bought a 1993 FXR super glide in Wisconsin. My good friend Dave Polgreen drove over from St Paul and checked it out and picked it up for me. I flew into St Paul and got to spend the day with the amazing Pete Mason, the next day Pete Dave and I loaded our bikes up and headed west to check out Sturgis. We stopped at Karls Cycle supply, Karls son Matt Olsen took us on a grand tour and let us ride some of their bikes it was a dream come true. There place is vintage Harley heaven, 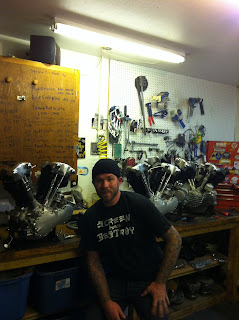 "me and 5 freshly built Knucklehead motors" 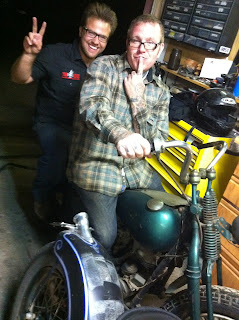 After Karls we headed straight to Sturgis, within a few hours Pete and I looked at each other and said we were ready to leave. It just wasnt our kind of place. But we met up with some friends and the day got better. 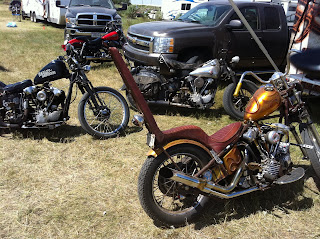 "Kevin Bass let me ride all 3 of his amazing knuckleheads"

The high light of my our time in Sturgis was the dinner that Jeff Holt and Chris from Street Chopper took us to in Deadwood. Great friends and good food make for the best of times 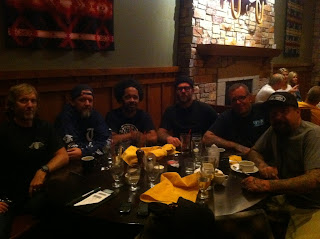 The next morning i loaded up early and got on the road to head back to California. 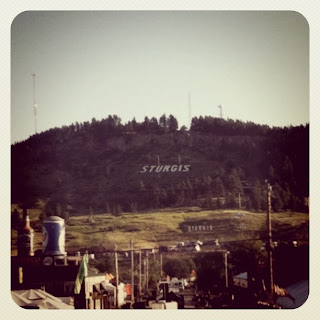 The Black Hills were beautiful to ride through, and i stopped at Mount Rushmore, i had never seen it and glad i went 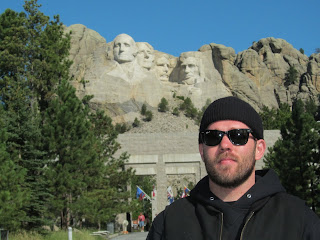 "The dudes and I, it was alot smaller looking in person then i thought it would be"

I was making good time and had covered 550 miles when all of a sudden the bike just stopped running i got over to the side of the highway and couldn't get it to start again, i called for a tow. 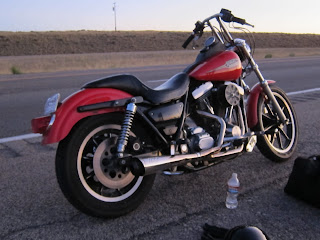 "Waiting on the side of the road"

About 30 mins into my wait a guy on a bike pulls over to see if i need help. His name was Bob and he was also on a FXR, i tell him its my electrical system and its not something i can fix on the side of the road, so we just talk for a few mins. It turns out he bought his FXR brand new from the dealer in 87 and 30 minutes before he saw me his odometer had turned over for the 2nd time. He has personally logged over 200,000 miles on his bike. 25 round trips from Riverside Ca. to Sturgis, 4 round trips to Daytona bike week, and 4 rounds trips to Laconia bike week, are just sme of the miles he has done. He has had the motor built twice, but hasnt changed much. He turned in the 7 spoke mags when the factory recalled them and installed the 9 spoke and made some hard bags, but the bike is still original paint and everything else. It was great talking to Bob and i hope to run into him again some day 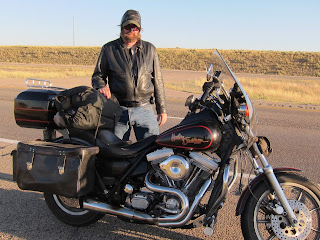 Bob and his machine

I was on the side of the road for almost 5 hours, almost got into a fight with a Tow Truck driver, and then pushed the bike close to 2 miles back to a truck stop called little America on I 80 in Wyoming. I had to stay the night there. The next morning a different tow truck came and took me into Utah. Andy from Pangea Speed came to my rescue. I had met Andy is Japan last december, and then in Mexico on the EL Diablo Run in May, but we barely knew each other. He picked me took me to his shop, and let me use his tools. All because we have some mutual friends. I cant thank him enough. The rotor had thrown a magnet and destroyed the stator. 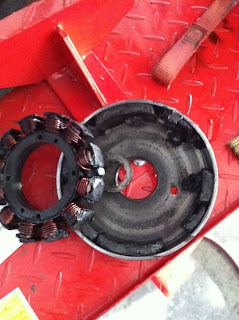 Andy took me to the harley dealer where i picked up the parts and replaced them, with some help on the phone from my good friend Frank Kaisler. I got back on the road at 7:30 pm saturday night. I had lost a full 24 hrs. I did 200 miles that night and slept in Beaver Utah. On sunday morning i got back on the road and killed the last 530 miles through the desert and back to the SFV. What an adventure. Breaking down totally sucked, but thinking back im glad it happened. It just adds to the adventure. I love motorcycle now more then ever before, but what i really hold dear to my heart in the amazing group of people that i get to call my friends, that i wouldn't have met if it wasn't for bikes. That is the truly great part of this world that we are all involved in