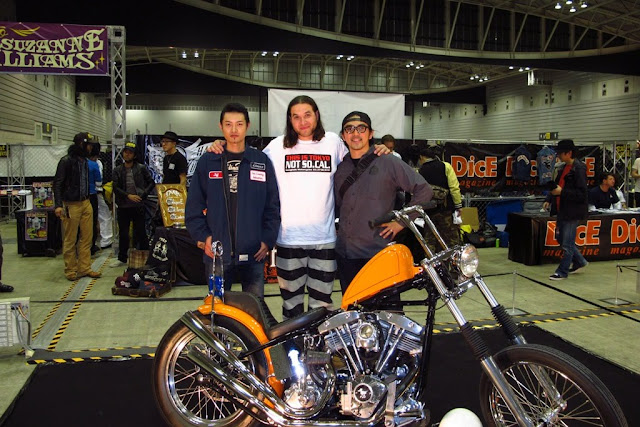 i have been emailing back and forth with some of our friends in Japan since the earthquake and while most everyone we know is in the Tokyo area and west in Nagoya and Osaka, we've been anxiously waiting word from Sendai. Rikiya Katsuta (the owner of the shovelhead on the right in the photo) sent me a couple of email updates. Lucky for him, he lives in Tokyo near another friend of ours, Gaku Yokomizo from Hawgholic, and had been despiratly trying to reach Daisuke Miura (on the left of me) who built Rikiya's shovelhead at Cosmic in Sendai. this morning i woke up to another email from Rikiya saying he he found out Daisuke and also Osamu-san are ok. Their shop is in great disorder from the earthquake, but that them and their families are ok.

With all devastation in north east Japan and with thousands dead, it's good to know that at least a few that you know are ok. That's not to say that they don't have one hell of a road to go down from here to get back to some sort of normal. It's too bad that this kind of tragedy is what it takes for us to think more about those that are close to us and just how delicate life is.

I am lucky to come from a big family that apparently has good genes, we live a ling time and suffer from little to non-existent genetic troubles. My only problem is that i have been the better part of a thousand miles away from my family for over a decade now...following all my crazy hopes and dreams...which has worked for me for the most part, but the distance of family is the greatest cost. i am lucky to have great friends who i have considered my stand-in family for most of this time and think nothing of it now. I am coming close to having spent more holidays with friends both old and new than with my blood family which we usually connect via the phone during these times, but as some of the elder family members like my grand parents get older ( i think the 3 remaining are all in their 90's and grandpa John would still be with us i'm sure if it weren't for one reckless drunk driver in the early 1980s...

Anyway, make a call, write a letter, send an email, print a photo out and send it, flowers, etc to some of those you love. you can't take it with you, all these pictures on blogs, internet, crap in your garage, etc, because he who dies with the most toys is DEAD.

THis is all the more reason to be as passionate about what you love while you can, learn as much as possible, see the world because even language is a small barrier when you find a common ground with people halfway across the world.
I may have mentioned in some post before about feeling at an early age that i already wouldn't have enough time in life to do everything i wanted (even back when i was 16 or 17) let alone now that i am 31. Life is too short to be angry, to be jealous, to squander your time here in negativity. That to me is the biggest tragedy of all, wasting the most valuable thing you have that you didn't cost you anything.

Anyway, i am probably pretty far off base now, but we are all thinking about you in Japan.
Posted by grant at 11:12 PM